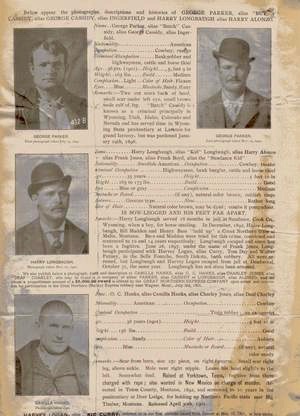 Madam Volvino down the road would have scammed the Wild Bunch. I pictured that dolly-mop charging a lower fee for her bawdy house services and then afterward, jiggling her fat rump straight to the law to collect the one grand in Bounty—one grand for Butch alone.

Only hours ago, Butch, Sundance, Kid Curry, Deaf Charlie, and William “News” Carver trotted off in three different directions. Carver said he’d soon return for Lillie and ride her off into a sunset dream. Like Sundance did with Etta last night. More girls to replace.

I counted again. Expenses, already deducted, included the vast amount of food Reba had cooked up for the entire house, the twenty bottles of French Gosset champagne—one of which I kept for myself—and the Cuban cigars—one of which Reba kept for herself. And, of course, the girls’ wages.

The familiar wide-hipped, narrow-waisted woman sidled through the swinging doors and into the kitchen, balancing a silver platter piled with dirty dishes. “Lawd have mercy,” Reba muttered.

“Too much on your plate?” I asked, laughing at my pun.

“Them wily bunch might be good at train robbing, but they ain’t worth nothing when it comes to sprucing up behind themselves.” Reba set the tray on the counter and then plunked into the chair closest to my desk in the kitchen’s corner. She stared at my grin. “What? It ain’t funny, Fannie Porter.”

“Isn’t funny,” I corrected. “Besides, this is the last for the Wild Bunch. The whole country’s chomping at the bit to catch them, especially the Pinkerton Agency. Gang’s splitting up.”

“So they says.” Reba grinned and shook her head. “I tells you what is funny. You chasin’ a known killer round the house with a loaded broom.”

“Wasn’t funny at the time.” Last night, Kid Curry, too liquor-seasoned to keep his chin above his neck, broke two of my rules. First, he entered my bedroom without permission, and then he tore my silk sheets with his spurs before I managed to shoo him out. “He promised to send new ones.”

“Mmm. And I’s growing catfish in my garden.”

Excerpt from The Last Bordello.

3 thoughts on “Her Loaded Broom”