I had eaten my Swanson’s TV dinner on top of the TV tray and watched and listened to what I could on TV. Even Dr. Kildare, who usually makes me foolishly swoon, looked more like Barney Fife. I’m going bonkers. I know it.

But bedtime was bliss.

The “TSR”, the Temporary stay room,” as Olvie calls it, could be a lot worse than it is. Although the dresser and the headboard on the twin bed are stained puke green, the room itself is at the front of the house. I have one window that looks out to the street. The window on the side gives me a view of the neighbor’s trashcans lined up against their pink brick house.

I had discovered that the window locks are easy peezy. One twist and I could be home free. I know where our spare house key is hidden. How hard would it be to go home, at least for a few hours? Crank up my record player. Listen to Booker T. or the Isley Brothers on Mom and Dad’s new Magnavox player. Or, with the money Mom gave me for “emergencies,” I could go someplace else. Like, for days.

Current Work in Progress, a novel set in 1963 during segregation.

Early one morning, when my son was a teenager, I got a call from a police officer. They’d arrested him. My husband and I met them on location where I saw my son sitting in the back of a police car. It was one of the worst days of my life. It was too hard to even look at him.

He had been with another kid he didn’t know well. Together they “tagged” a high school.

That evening I painted this. It pretty much explained what I was feeling at the time.

Today, my son is a loving husband and father. I count my blessings every day! 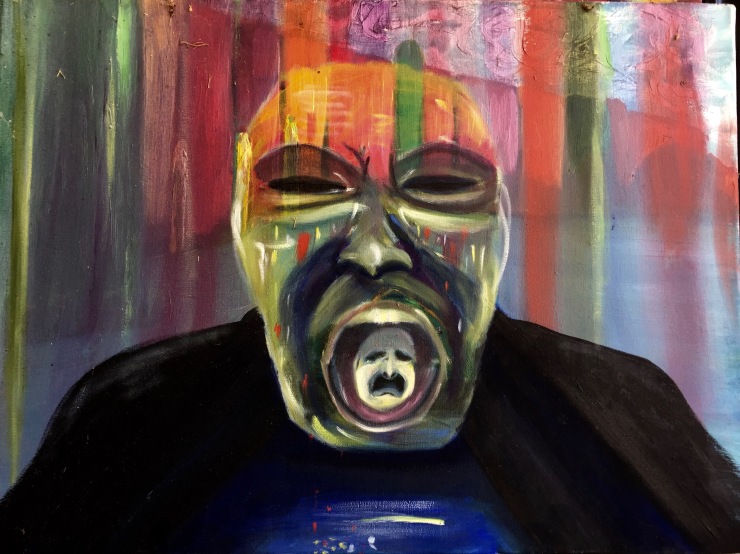 “Come out to the family room. Gladys wants a word,”Olvie yells from the front room.

Now I’m creeped out that a mannequin wants to speak to me. What will I say? Oh for Christ’s sake!

I take my time opening the bedroom door and peek out before exiting. Olvie’s hovering over the plastic body so if Gladys is saying something, I can’t tell. Yep, I’m going nutso.

“Good. There you are.” Olvie says turns toward me and stands erect. “What do you think?”

“Why, oh, did you take her shopping?” I say, trying not to think about myself in a straight jacket.

“No, silly-billy. Gladys doesn’t like to go out. I had it mail-ordered from Sears and Roebuck.

Gladys is no longer flapping in the 1920’s. Her fringed dress and headband are gone. She’s caught up with our decade and, although too big for the thin mannequin, I can’t help being impressed. The moo-moo is light green with white daisies attached to darker green vines that run diagonally down the dress. Orange stitching accents in between.

“Well, what do you think?” Olvie, or maybe Gladys says.

Olvie smiles. “She wanted a change so she got one.”

“Everyone wants a change, don’t they, Olvie?”

“Not everyone,” she says, and stares out the front window.

I’m so excited about the change in Gladys, I remind myself I need a real friend. Someone who’s not crazy or made of plastic.

I make myself a bowl of Trix cereal and try to remember I’m not a kid like the floppy-eared rabbit tell us on TV.

Sitting on the leopard print living room couch next to Gladys, I know I’m living in an episode of The Twilight Zone. Not because Gladys sits in the exact same spot wearing the same flapper dress from when I got here three days ago. And not because Olvie hasn’t bothered to move her. I’m in The Twilight Zone because I have to spend the next few weeks living with a fruitcake.

I peek out the front window. Olvie’s at it again. Just a few minutes before, like she’s done every morning, she told me to “stay put” until she comes back inside with the newspaper. And like every morning, she won’t pick it up until she sees Elias Ford heading her way on his walk to work.

Olvie’s shuffling down her sidewalk towards the curb wearing her moo-moo and striped yellow and black socks. She bends down to pick up the newspaper. He must be getting close. Yep. I see him now. Mr. Ford has stepped into the danger zone, too close to The Property of Olvie P. Crazy.

Like always, Mr. Ford tips his shabby hat and attempts to hurry past.

Like always, Olvie steps in front of him with the familiar finger point and the poke, poke, poke to his chest.

I don’t get why she doesn’t like him. What’s the Controversy anyway?

Yesterday morning, Crazy Olvie had forgotten to close the front windows. I heard her ask Mr. Ford if she could spit on his shoes. “It won’t take long,” she’d said, almost politely.

I wonder what she’s quacking to him about this time. That his shoes need polishing? That his rusty lunch pail should be thrown off a cliff? That the only reason he still lives around the corner is because my daddy spent “too much time” repairing his house so the city wouldn’t tear it down? Mr. Ford lives in what some ignorant people call, The Black Pocket—a small thicketed area that folks like Dad fought to keep intact. Including the ten or so residents.

Mr. Ford shakes his head. I bet right now he’s wishing he’d moved after all. His expression reminds me of Tom Robinson in the movie To Kill a Mockingbird and the thought makes me sad.

I get in Gladys’ face. “Let me tell you. I’m not happy about being here either. So there.” She doesn’t respond, of course.

I must be catching her loony bug. Perhaps I won’t last a few weeks. Maybe not even day four. I ponder where to go and what to pack before I run away.

Excerpt from a work in progress.

The rock crashes through the front window and glass shatters over Gladys. Crazy Olvie reaches for the telephone that sits in its cubby space in the short hallway. “Hurry up, now. Read me the name of the Sheriff’s Department.”

I know she meant to ask me to read the number instead of the name. But I can’t help it. I look at her telephone list of numbers taped to her fridge and say in my best deadpan voice, “Sheriff’s Department.”

Her cheeks flush and her eyes look like they belong to one of Dracula’s brides.

Mom had laughed when she told me that every time Olvie has to phone her doctor, she freaks out and curses all the zeros. She hates sticking her fingers in the seven-through-zero slots because she doesn’t like waiting for the dial to spin back around to home base.  Lucky for her, these numbers won’t take any time.

Excerpt from my Work in Progress, Olvie and Chicken Coop (working title)

I no longer have teenagers (thank God those years are over), but I realize many of you do or perhaps will soon. This “letter” is powerful and shows the emotions of struggling teenagers and what they need and want their parents to understand. I learned about this from a friend who has a teenager.

Carol, Donna an me (me the skinny minnie on the right) discovered this Hideout. (Donna’s taking the picture from my Polaroid camera) In the wooded area near our houses, and just over the railroad tracks, we found this tin shack. It wasn’t surprising since “hobos” often frequented the trains. A pipe suck out of the so-called roof where the smoke from the inside-makeshift-fire-place could escape. We never built a fire, nor did we ever sleep there. But it was a place to go at the age of 15 to get away from (egads) the parents and the world. It was there we puffed on cigarettes.

1971, when the New York Times begins to publish sections of the Pentagon Papers showing the US Government had been lying to the American People.

And then, we have:

There’s more. Much more. But some secrets must be kept!  🙂